Challenges and Opportunities to improve the livelihoods of Smallholder Farmers

To be a smallholder farmer undoubtedly means to be part of the driving force that provides the basis for economies in developing communities such as the East African. And no matter how prosperous this may sound and regardless of the huge state`s dependency on agriculture export for foreign currency, farmers` lives are filled with uncertainty and great challenges. Although coffee and tea are the main cash-crops in East Africa, smallholder farmers are illogically not benefiting at all from these relatively rich industries and high income earners.

So what does being a smallholder farmer actually mean and what are the main constraints that this large group is facing?

Smallholder farmers are usually defined as small-scale producers; those marginal and sub-marginal households that own or/and cultivate small-based plots of land (up to 10 hectares). On this land they grow mainly subsistence crops (food crops that farmers use to feed their families) and one or two cash crops like coffee and tea. In fact, it is estimated that coffee represents about 20% of the crops grown on family plot, but provides around 50% of the cash income. The remaining 80% are food crops like cassava, banana, maize, millet or beans and most of these when harvested are consumed by the family or sold in local markets. Large part of the smallholder family farms depend entirely on a system of family labor. The cash-income that they receive for their production is used for expenses such as medication, school, cooking oils, fuel, house repairs, agricultural inputs and other fundamental and necessary for a normal functioning , household needs.

What makes these urban and rural households become discouraged and uninterested to continue growing coffee/tea and thus to abandon agricultural production?

One of the main constraints faced by smallholder famers is the lack of reliable markets as well as the huge price fluctuations for commodities like tea and coffee. Nothing is certain until the production is bagged and cupped and the price is paid. The fact that tea and coffee are generally not consumed locally, thus cannot be sold in local markets like bananas, maize and other food crops, makes this type of produce extremely vulnerable to international market prices. There are times when coffee prices fall below the production price as well as many cases when farmers receive low prices for their products due to the lack of direct access to consumer markets. What`s more farmer`s illiteracy is also a huge problem preventing them from predicting pricing trends and planning ahead, which is crucial for any profitable organization.

Furthermore, smallholder farmers experience limited access to capital and input resources – this has reduced their competitiveness relative to imported products in domestic markets in addition to export markets. Although there are some development/commercial banks and micro-finance schemes that provide loans, farmers` limited knowledge of the sector, remoteness from rural areas and high interest rates make it challenging and almost impossible for them to obtain financing.

Another reason for decreasing agricultural productivity is undoubtedly climate change – farmers are often completely exposed to weather conditions and they have no power over changes in the environment. Rising temperatures and heavy rains can globally reduce suitable areas for coffee production by as much as 50% by 2050. One of the two coffee species that accounts for almost the entire international coffee industry – the Arabica plant, is specifically in danger, as it is very sensitive to temperature increases. Climate change is causing failure of harvest, which makes farmers unable to cover their costs for production and puts their livelihoods under an increasing threat.

Insecure incomes for smallholder farmer communities result in various other pressures on factors such as education and health. It is common to find farmer`s children chased out of school due to parent’s inability to pay school fees. Moreover, farmers often lack social security, as it is not provided by the State and it is not affordable for their level of income. Medication is expensive and in rural areas there is a lot of counterfeit medication sold.

A different problem worth mentioning is the existence of a gender gap in agricultural productivity and a wide array of gender disparities in African communities. This may be due to the predominantly patriarchal societies, where women traditionally do not inherit /own land and are completely dependent on their husbands for income. Alcoholism is a growing challenge in rural areas with high unemployment rate. With husbands being the main consumers, it is common for them to collect money from the harvest and spend most of it in a bar drinking with a friend, before coming back home.

After painting such a dark and pessimistic picture of the lives and challenges that smallholder farmers face, it is normal to ask ourselves the question: is there a way to support their agricultural growth and to address their problems simultaneously?

Fortunately, there is and the solution lies in the face of coffee and tea cooperatives – one of the most effective interventions through which growth in smallholder farming could be enhanced. Cooperatives could be described simply as a group of producers cooperating to gain a better access to resources, create long-term food security and job positions, as well as reduce poverty. They offer opportunities that smallholder farmers would not be able to benefit from, if they operate independently. Those include (but are not limited to): providing technical assistance, securing land rights, providing supplies such as pesticide and fertilizers, expanding market access and helping them achieve greater bargaining power.

So, what different approach lies behind Almacena`s endeavours to help African cooperatives and traders get affordable working capital financing and reach new markets? The answer lies in the goals set and the established priorities to explore solutions to the financing gap providing an immediate Positive Impact in line with the UN Sustainable Development Goals. The only acceptable business model for Almacena is the one in which the planet and the society thrive and its only mission is sustainable financing for a positive change. To achieve that, the Platform is set to support cooperatives with the highest degree of impact created via the provided funding. The results will be measured and reported using the IRIS metrics framework. Thus the impact of agricultural cooperatives on the welfare of smallholder farmers will be evaluated quantitatively. This would allow for a better understanding of how cooperatives can be more effective in improving the wellbeing of rural community.

What’s The Difference Between Supermarket Coffee and Specialty Store Coffee?

Coffee is one of the most popular beverages around the world. From light to dark roast and cold brews to cappuccinos, there seems to be something for everyone. Many of us may enjoy a cup Read More… 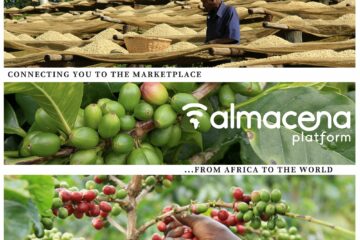 Welcome back! As our motto suggests, we’re all about enabling African agricultural trade. In doing so, we’d like you to join us on our journey and in our community for producers and vendors alike! We’re Read More…

As registered and approved vendor in the Almacena Platform you have your personal profile page where you can promote your products and business to Almacena network of customers and to the world. In this short Read More…

Get to know about us